Read About The Policy's Origins from Club of Rome Rhetoric 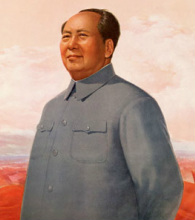 Mao Zedong
With the formation of the People’s Republic of China in 1949, the nation was more interested in increasing the population rather than limiting it.  Mao Zedong, the founder of the People’s Republic of China and the first Chairman of the Communist Party of China, “urged Chinese to have lots of children to support his ‘human wave’ defense policy” to protect the country from an attack by the U.S. or Soviet Union (Hays).  He condemned birth control as a “capitalist plot to weaken the country and make it vulnerable to attack” and banned the import of contraceptives (Hays).

In 1955, the government began to worry about how the nation’s food supply would be able support the burgeoning population (Fitzpatrick).  As a result, laws banning birth control, sterilization, and abortion were repealed.  The government began to mass-produce and distribute contraceptives in an effort to diminish population growth; however, the supply could meet the needs of only 2.2% of all couples of childbearing age (Henneberger).

The Great Leap Forward, an attempt to modernize China through industry and agriculture that resulted in a famine that killed 40 million, further concerned the Chinese government about the country's population growth.  In response to these heightened fears, the government resumed measures to limit population growth through “renewed production of contraceptives and massive media campaigns promoting late marriage, low birth rates, and the use of intrauterine devices (IUDs) and vasectomies to limit fertility” (Henneberger).  However, the government's efforts to lower fertility and population growth were interrupted once again, this time in 1966, by the Cultural Revolution (Fitzpatrick).

At the start of the 1970s, China continued its plan to lower population growth through a policy of “Later, Longer, Fewer” encouraging couples to "marry later, wait longer to have children, and have fewer [of them]" (Weiss).  Mao used the slogan “One is good, two is OK, three is too many” to express his preference of how many children couples should have (qtd. Henneberger). 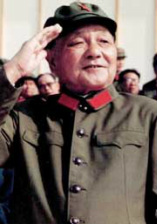 Deng Xiaoping
After Mao died in 1976, Deng Xiaoping came to power as the next Chairman.  Deng supported Mao’s goal to limit fertility and population growth, "[A large population] poses serious problems with regard to food, education and employment. We must greatly increase our efforts in [birth] planning" (qtd. Marketplace).  In 1979, Deng imposed the one-child policy to “curb the growth of [China’s] massive population . . . hoping to relieve the pressure exerted by its large population on various social, economic, and environmental realms" (Dvorsky).  The one-child policy was set to be reexamined thirty years after its implementation in 2009, and within that period, the policy has caused various problems that need resolving (Weiss).


Click here to see a timeline of China's population.

Without a one-child policy ... people will have nothing to eat and nothing to drink! There will be so many Chinese that all the roads will be covered with people! — Song Jian,  Influential Missile Scientist